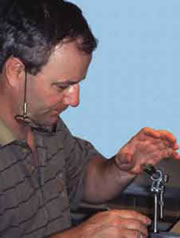 School is out for the day, and a teenager gets on his bicycle and starts to pedal the 45 kilometers between his home in Trois Pistoles and Riviere du Loup. The apprentice pedals hard, for a late arrival is sure to provoke a rebuke from professional fly tyer, Jean Michaud. In this era the secrets of the vise are jealously guarded, and the young man is lucky to find a willing, if demanding, teacher. Both bicycle and vise were destined to play major roles in the life of Jean-Guy Côté, the Man from UNI. Another lasting influence was one of Michaud’s creations, the John Special, an Atlantic salmon pattern with a spun and clipped deer-hair head.

After High-School Jean-Guy headed for Montreal to attend university en route to becoming a physical education teacher. Money being tight, he naturally sought out a tackle shop to try and turn his skills into cash. Fortunately, he chose the Sherbrookestreet store of another Quebec fly tying icon, John Cuco. Cuco quickly recognized talent, and soon the student moved in, paying for his keep by filling the shop’s pattern bins, particularly the Muddlers.

Teaching certificate in hand, Jean-Guy moved to the Joliette area, north of Montreal. He continued tying flies to supplement his income. The Joliette Hopper (brainchild of local tyer Bernard Boulard) was a popular but time consuming (i.e. low-profit) dressing. With the analytical style that characterized many of his later designs, Jean-Guy combined familiar elements to create a pattern that could be tied in a variety of sizes and colours to imitate caddis hatches and serve as a general dry fly for brook trout. Tens of thousands of Mud H o p p e r s later, it had become, by far, his most commercially successful pattern.

Returning for a moment to those bicycle commutes, they were the seeds of much bigger rides to come. Jean-Guy became a competitive cycler and competed locally and internationally, including involvement in the 1986 Mexico City Olympic Games. Sadly, injuries forced him to wi thdraw early from competition. Nevertheless, his enjoyment of high-level cycling never diminished. Competitive judo became another significant influence in his life and it helped him later to make an early business connection with Japanese distributors. 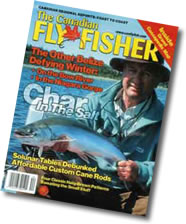 I first met Jean-Guy in the early eighties at the annual dinner of the Cold Creek Fly Fishe r s in Belleville, Ontario. He accompanied long time friend Claude Bernard to help with a presentation about brook trout fishing in lakes. At the time he spoke little English, and what he had learned had come from reading sporting magazines such as Outdoor Life and Field & Stream. A few years later, we were able to converse more freely, and I started to help him with small communication projects.

When we began fishing together, Jean- Guy rarely waded. Almost all his angling was from boats, be it trolling or casting for brook or lake trout, landlocked char or salmon, or casting to Atlantic salmon. For trolling he evolved a group of legendary flies that, when tied and fished correctly, continue to land memorable catches. To take advantage of surface activity, he early on recognized the potential of pre formed foam bodies and, consequently, created a series of trout and salmon dry flies such as the Foam Spider and Côté Foam Bomber.

Knots, their strength by test, tying techniques, and teaching the tying of, fascinated my friend. In conjunction with Claude Bernard, he developed the VIA Knot, so called because it came about while on a train trip from Montreal to Toronto. To tie the VIA Knot, simply double the initial bight of a Perfection Loop. Why bother? Because trollers habitually use a uniform diameter leader and many opt for a loop-to-loop connection between leader and line. Moreover, the loop leaves a “perpendicular” tag end, perfect for attaching a dropper. While a standard Perfection Loop produces a similar tag end, it’s considerably weaker than the Via knot. Jean-Guy also developed a complete package for demonstrating proper knot-tying techniques and presented it at fly fishing events in Quebec.

Beyond his skill as a commercial tyer, Jean-Guy was also recognized as a talented exhibition tyer, exemplified by the series of twenty-four Muddler patterns he created for the world-renowned William Cushner Collection. In addition, for several years he judged the World Salmon Fly Tying Championships event, organized and run by the Fédération Québécoise pour le saumon atlantique (FQSA).

UNI Products, although not yet named, began with Jean-Guy hand-spooling thread and working on an improved wax and waxing system, helped by visits with Harry Darbee. It was the discovery of an outstanding polyester thread that would become the company’s foundation. However, without the founder’s self-taught mechanical, computer control, and design skills, it’s very unlikely UNI could have become the world’s largest supplier of spooled fly tying materials. As the company grew, Jean-Guy developed an outstanding wax formula and infusion waxing system, automated labeling and spool delivery systems, and overhauled and improved large spooling machines. He also designed a signature black spool, high-quality informative labels, spool packaging and storage systems, and material dispensing containers. UNI introduced numerous new materials to fly tyers, and at present spools more than 1000 products (see Potpourri in this issue of The Canadian Fly Fisher for a note about UNI’s future). With distributors in nearly 50 countries, it’s fair to say that UNI is Canada’s fly-tying face to the world.

My friend will be greatly missed, particularly by the fly-tying community. Fortunately, he undertook to preserve his memory by endowing an annual Jean-Guy Côté flytying prize and donating his collection of fly fishing and fly tying art and literature to the proposed Canadian Fly Fishing Museum in Waterloo, Quebec. Recognition of prize winners and the collection will be housed in the Jean-Guy Côté Room, to be built as a part of a major expansion of the Waterloo Public Library. *